The following blog was written by Emma Anderson, one of our stellar interns this summer!  She highlighted a critical concern we have for many of our female students and in general, women and girls in the region.  Please read on to understand WHAT our S.P.E.A.K. Up! Series is all about and why you should get involved!  Donations are always appreciated to continue the work we do in Gulu and surrounding areas.

“Nurse, I have had pain between my legs for a very long time.” When Amito Beatrice*, an 18 year old student in Educate for Change’s scholarship program, finally went to the infirmary at her high school, the nurse gave her a dose of Panadol, the off-brand equivalent of Tylenol, and sent her back to school.

The pain didn’t go away for another month or two. It became so unbearable that her school called Educate for Change (E4C) to report that Beatrice was not recovering. Kristine Sullivan, E4C’s Program Director, made a site-visit to her school to check on Beatrice. After hearing the symptoms and discovering that Beatrice had been suffering from this recurring pain for over a year, she took Beatrice to the health clinic where she was diagnosed with a yeast infection so severe that they had to inject her with antibiotics to fight off the disease.

Female-specific issues and women’s empowerment are not taught in schools in Uganda. When she first contracted this yeast infection, probably from sharing a shower bucket in her all-girl’s dormitory, Amito Beatrice had no idea what was happening to her body or what to do about the debilitating pain. She was embarrassed to talk about it because issues with the female body, though not necessarily taboo, are not culturally comfortable topics to discuss, even with other girl students or women at home in the village. The pain from the year-long infection impacted her ability to concentrate on her schoolwork and to live a comfortable life as a woman.

This incident epitomizes the compounded issues that women and girls in Northern Uganda, and indeed around the world, face due to the lack of education on female-specific medical and personal issues. Dealing with menstruation can keep female students “away from school for the four or five days of their period each month” (NPR). Educate for Change identified this gap in the education system and resolved to do something about it. Girl’s Health and Leadership Camps, they decided, were a way they could help.

These camps are inspired by the work of Kakenya Ntaiya, a Kenyan woman who, at the age of 13, was forced to bargain with her father for her right to education. The agreement? Her clitoris (or participating in the cultural coming-of-age ritual of female circumcision) in exchange for the ability to go to high school. In the face of the innumerable challenges facing a young woman of colour growing up in poverty in a rural village in East Africa, Kakenya was driven to succeed and was awarded a scholarship to study at a University in the United States. She completed her undergraduate degree at Randolph-Macon Woman’s College in Virginia and then went on to the University of Pittsburgh, where she received her Doctorate in Education in 2011 (Ntaiya). She has used her success to return to her village and build Kakenya Center for Excellence, a girls’ primary boarding school in Enoosaen, Kenya. Educate for Change and Kakenya believe that education will empower and motivate young girls to become agents of change in their community and country. To fulfill this vision of female empowerment through education, Kakenya devised a curriculum to teach girl’s about their potential as leaders, knowledgeable women, and change-maker’s in their own communities. Educate for Change has adopted the spirit of this curriculum and revised it to fit the needs of the girls they serve in Northern Uganda.

In April 2015, E4C launched the pilot program of a Girl’s Health and Leadership Camp series that will be implemented in four different communities in Northern Uganda during the month of July 2015. Over the course of three days, their 16 female scholarship students attended workshops on three strategic focus areas: Self-Esteem, Self-Knowledge, and Self-Defense. E4C organized local Ugandan women to come in and present on these three topics and trained University students to serve as small group counselors, acting as role-models for the girls and answering questions they had on topics ranging from whether they could get breast cancer from inhaling the smoke of trash fires that contain plastics to whether they could lose their virginity from kissing a boy. The camp facilitators were ready to dispel the many myths and misconceptions about the female reproductive system and sexual health that the girls had.

A clear indication that the pilot camp was effective came from the entrance and exit surveys. On the first day of the camp on the entrance survey, fifteen out of the sixteen girls responded that they were sexually active. During a question and answer workshop, the camp leaders discovered that the students believed that “sexually active” meant that they had started their periods. By the last day, after thorough workshops on the reproductive system and sex education, on the exit survey just five of the oldest girls marked yes to the same question. All sixteen graduated from the program and each girl was awarded a certificate of completion, a package of Afripads – reusable sanitary napkins manufactured in Uganda, and a T-shirt with the camp motto – S.P.E.A.K. UP!, which stands for Self-Esteem, Protection, Empowerment, Action, and Knowledge. 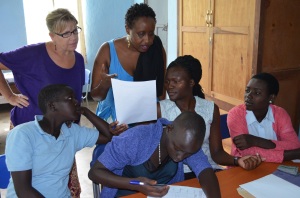 By the end of July 2015, 416 female students ranging in age from 14 – 19 years old will gain skills in self-esteem and public speaking, know how to manage and track their periods, be able to identify and prevent sexually transmitted diseases, and learn basic risk prevention techniques as well as practical self-defense tactics. With this toolbox of knowledge, these girls will not have to go through the pain and embarrassment that Amito Beatrice had to endure. With these new skills, over 400 girls will be empowered to speak up when they return to their villages and share this invaluable knowledge with their mothers, sisters, and aunties. With these Health and Leadership Camps, Educate for Change has found an effective means to improve the lives of women and girls in Northern Uganda.

*Actual student’s name has been changed to protect her privacy.

View all posts by Educate for Change